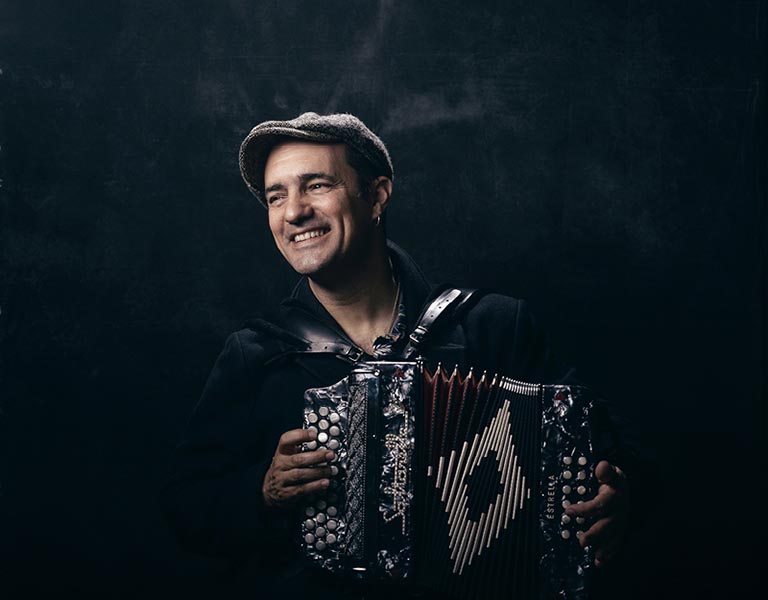 Founder of Dusminguet and the soul of La Troba Kung-Fú, Joan Garriga is essential to understanding the development of 21st-.century popular music made in Catalonia. After writing and performing live the soundtrack to the last two stage shows by Oriol Broggi, the co-discoverer of Rumbia — a mixture of rumba and cumbia straight from the Vallès region of Catalonia — he has just made his solo debut with an album that promises to be an instant classic.

Recorded between 2019 and 2020 and mixed during lockdown, El ball i el plany (2020) is a thrilling journey through all the worlds that fit into Joan Garriga’s accordion: the Mediterranean of havanera and raï, the Latin Caribbean, the Jamaica of reggae and dub and of course northern Mexico, the inspiration of his latest band. Accompanied by his faithful veteran bassist Marià Roch, Rambo cooking up the rhythms on drums and guitarist Madjid Fahem (Manu Chao, La Ventura), the real heir to Gato Pérez takes his place in the pantheon of fusion without confusion.

Tickets: €18
Include wine tasting
Doors open at 11am
Capacity: 180 people